You are here: Home / Author Coach / Transforming Life Experiences into a Saleable Memoir. The Power of Memories.

Helping our client convert hundreds of pages of text, countless speeches and riveting videos into an inspirational memoir was just the first step. The challenge: to revise his epic into a magnetic, highly salable work.

“Dr Joyce Starr (aka, ‘The Book Doctor’), added her unique and special touch to every chapter. Joyce helped me more than anybody else on this ongoing odyssey, adventure.​” – Michael C. Turpen, author, Turpen Time: The Wit and Wisdom of Mike Turpen (Tate, September, 2013).” 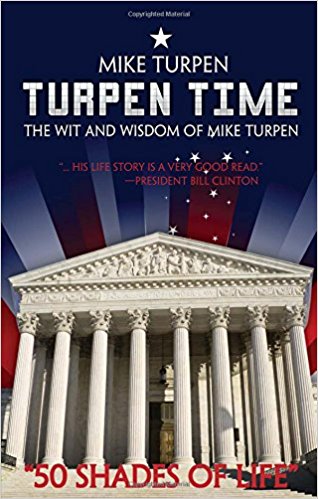 Helping our client convert hundreds of pages of text, countless speeches and riveting videos into an inspirational memoir was just the first step. The challenge: to revise his epic into a magnetic, highly salable work.

After reviewing Mike’s vast material, we held a series of author coaching teleconferences with the author. Mike welcomed our suggestions for organizing and restructuring his content. We also brainstormed a memorable title for the book, aware that a strong working title can help sell a book. Mike produced a revised draft based on our teleconferences and then delivered the project to our care.

Content editing took us to the third draft. Now it was time to line edit – to fix minor issues and typos common to most manuscripts. Mike writes as he speaks – folksy, uplifting and engaging. By the final draft, his words still had the power to move me.

Following the editing process, we drafted a combined pitch letter and proposal for the publishing community. The opening sentence was both powerful and unusual, guaranteeing a  closer look.  (Join our coaching program, and I’ll share it with you.) My partner, New York literary agent Karen Gantz, then presented the book project to a honed list of preferred publishers. We’re pleased that Tate Publishing, a leading Christian publisher, is producing Mike’s book. The publication date is September 2013.

Preparing the Draft manuscript for Publication

Once Tate accepted the book proposal, we entered a highly intense editing phase – fine tuning the chapters, copy revisions based on Tate’s suggestions, brainstorming various cover concepts, and preparing Mike’s author pages on Tate. The process took nearly a year to complete, including over 150 emails to Mike and/or Tate! Few aspiring authors understand what it takes to prepare a manuscript for publication or achieve the best outcome with their publisher.

“Since I have never engaged in an adventure like this before I really had no idea what to expect OR how much everything is worth. With all of the help, advice and editing in the last several months…you have been an absolute Godsend.”

We’re confident that Mike’s memoir will inspire readers to view life’s obstacles as a gift and the gift of life as priceless.

Condo Mold Debuts at #1 on Amazon in Practical Guides to Real Estate! Condo Owners: What are … END_OF_DOCUMENT_TOKEN_TO_BE_REPLACED

How to Defend Your Condo Rights/HOA Rights. How to fight back when your HOA Board turns your life … END_OF_DOCUMENT_TOKEN_TO_BE_REPLACED

How Charging Owners to Rent Their Units Can Reduce Burdens & Costs. Do irresponsible renters … END_OF_DOCUMENT_TOKEN_TO_BE_REPLACED

Condo Board Recall: 10 Steps to a Successful Board Recall Authored by homeowners association … END_OF_DOCUMENT_TOKEN_TO_BE_REPLACED

Discover how condominium association & HOA board elections SHOULD be conducted. When others … END_OF_DOCUMENT_TOKEN_TO_BE_REPLACED

Looking Up From Heartbreak

“Looking Up From Heartbreak” takes you on a journey from heartache to recovery – from raw feelings and tears to hope and laughter. From the loss of romance and love to self-healing.