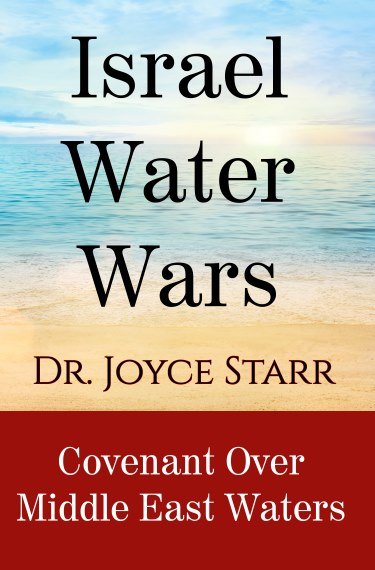 This work exposes the battles over Israeli and Middle East water policy that eventually diluted the peace process. It also illuminates the spiritual view of water set forth in sacred writings and how this legacy has shaped the current political terrain.

“Dr. Joyce Starr’s many years of experience shaping water policies in the Middle East have yielded a work that is a must for anyone with a serious interest in the region’s future.” – Kirkus Reviews

The very waters of life, according to Jewish, Christian and Muslim traditions, are said to flow from the Holy Land of the ancient Middle East region. Yet, today’s politicians chart a perilous course. Their policies could bury the area under concrete, shatter hopes for lasting peace, and pose a threat far beyond the immediate reality. 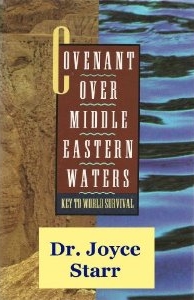 I published this book in the mid-1990s under the title: Covenant Over Middle Eastern Waters: Key to World Survival (Henry Holt) Few copies of the original book remain. Therefore, I am offering a limited paperback edition and EBook PDF under the title Israel Water Wars – exclusively for my site visitors.

A key conclusion: that senior State Department officials, enamored with Syria but fearful of Turkey, squandered a chance for Middle East water peace in the early 1990s. We did know then what we should know now.

Starr’s complete, humanistic presentation is beautifully written. The Middle Eastern population suffers from a shortage of water. The importance of controlling these resources is well conveyed by the author. She attacks the planners who intend to bury agricultural lands with cement.” – Benny Begin, Member of the Knesset, Israel

A senior associate at the Center for Strategic and International Studies in Washington, D. C., Starr has invested enormous scholarly and personal effort to convince the governments of Middle Eastern states that if they do not act in unison to forestall a regional water crisis, they may be dragged into more unnecessary wars.” – Jay Bushinsky, Chicago Sun-Times

Starr’s book is not your usual work of nonfiction. It is not a textbook on the issue, although it contains data and maps. It is not a tract, although there is an intense feel to the work. Instead, it is a remarkably personal book by one of the leading water experts in the US. She begins her book with a discussion of water in the Bible. At first glance, the quotes from Genesis and Psalms seem totally irrelevant to the subject. But Starr is completely on the mark, aware that within months Israelis and Palestinians will be arguing over who had the water first. The question is whether anybody is listening.” – Steve Rodan, Jerusalem Post

He who controls the water, controls the Middle East. Anyone who wants insight into the events of the next millennium must read this book.” – David H. Hummel, former director, Christian Broadcast Network’s Middle East Television

Dr. Joyce Starr has written a masterful work which touches at one and the same time both the shores of spirituality and the hardball Middle Eastern real politic.” – Dan Gordon, screenwriter, Wyatt Earp, Murder in the First, Passenger 57

Condo Mold Debuts at #1 on Amazon in Practical Guides to Real Estate! Condo Owners: What are … END_OF_DOCUMENT_TOKEN_TO_BE_REPLACED

How to Defend Your Condo Rights/HOA Rights. How to fight back when your HOA Board turns your life … END_OF_DOCUMENT_TOKEN_TO_BE_REPLACED

How Charging Owners to Rent Their Units Can Reduce Burdens & Costs. Do irresponsible renters … END_OF_DOCUMENT_TOKEN_TO_BE_REPLACED

Condo Board Recall: 10 Steps to a Successful Board Recall Authored by homeowners association … END_OF_DOCUMENT_TOKEN_TO_BE_REPLACED

Discover how condominium association & HOA board elections SHOULD be conducted. When others … END_OF_DOCUMENT_TOKEN_TO_BE_REPLACED