“The craft or art of writing is the clumsy attempt to find symbols for the wordlessness.”

“In ‘The Waste Land,’ I wasn’t even bothering whether I understood what I was saying,”

“”First of all, keep busy. Don’t focus everything on you, that wears out pretty fast. It’s not hard to find things you’re interested in, but enjoy them and indulge them, and I think that can keep you on your toes.”

– Betty White in a 2017 interview with Katie Couric

All Wars are Fought Twice (Aka – Final Troop Withdrawal from Afghanistan)

“All wars are fought twice: on the battlefield and in our memory.”

– Viet Thanh Nguyen, author of “The Sympathizer” and “Nothing Ever Dies”

This country is Run on Epidemics

“This country is run on epidemics, where you been? Price fixing, crooked TV shows, inflated expense accounts. How many honest men you know? Why you separate the saints from the sinners, you’re lucky to end up with Abraham Lincoln…

“Nobody gets out of life alive.”

“A lie can travel half way around the world while the truth is putting on his shoes.”

“A first book has some of the sweetness of a first love.” – Robert Aris Willmott

Voice from the American Plains a Century Ago

“Minari” swept top prizes at Sundance in 2020, earning rave reviews from immigrants and non-immigrants alike. An Arkansas Times journalist recently called it “the most authentic coming-of-age story I’ve seen reflected on screen about our part of the world.” Script writer Lee Isaac Chung credited Pulitzer-winning novelist Willa Cather — who chronicled life on the American Plains more than a century ago — for inspiring him to tell it. About her books O Pioneers! and My Antonia, Cather once said she had written stories inspired by her own upbringing after years of imitating cosmopolitan authors in New York. “She wrote that her work really took off when she stopped admiring and she started remembering,” Chung told CNN. “And that’s what got me to sit down finally and just write out my memories. And that became the kernel of a film.”

Willa Sibert Cather was an American writer known for her novels of life on the Great Plains, including O Pioneers!, The Song of the Lark, and My Ántonia. In 1923 she was awarded the Pulitzer Prize for One of Ours, a novel set during World War I.

But the most astonishing thing about trees is how social they are. The trees in a forest care for each other, sometimes even going so far as to nourish the stump of a felled tree for centuries after it was cut down by feeding it sugars and other nutrients, and so keeping it alive. Only some stumps are thus nourished. Perhaps they are the parents of the trees that make up the forest of today. A tree’s most important means of staying connected to other trees is a “wood wide web” of soil fungi that connects vegetation in an intimate network that allows the sharing of an enormous amount of information and goods. Scientific research aimed at understanding the astonishing abilities of this partnership between fungi and plant has only just begun.

– Peter Wohlleben, author, The Hidden Life of Trees: What They Feel, How They Communicate―Discoveries from A Secret World

If you want to know why the US has one of the most inefficient health care systems among advanced nations, some of the worst infrastructure and a dysfunctional political system, blame drained-pool politics. The narrative that White people should see the well-being of people of color as a threat to their own is one of the most powerful subterranean stories in America. Until we destroy the idea, opponents of progress can always unearth it, and use it to block any collective action that benefits us all.

The exact counter to that is in Texas, a state cut off from the federal government to avoid being regulated, to avoid the kinds of safeguards that would have stopped the power outages, a state government that was totally absent from prevention to mitigation and taking care of its people. That was a very clear example of drained pool politics, of anti-government sentiment being put into policies that hurt everyone. It cost lives.

– Heather McGhee, author, The Sum of Us: What Racism Costs Everyone and How We Can Prosper Together

The only antidote to throwaway culture is to keep. So I am an obsessive keeper … Your first habit should be turning your clothes inside out and reading the label .. polyester sheds millions of microfibres … It has been found in the bottom of the ocean and the top of Everest. Every time you wash a piece of polyester, about 500,000 microfibres are released. So, how do you buy polyester? You buy something that doesn’t need to be frequently washed. You don’t buy polyester underpants; you buy a polyester overcoat that you can learn how to sponge-clean.”

It’s fair to say I didn’t expect, aged 93, to become Britain’s oldest debut author … I wanted people to know what it was like for the boys back in those days … My alcoholic, gambling father who deserted us; leaving school at 13 to help my struggling mother make rent. And then there is Jim: how we met at a dance and travelled the world together. My doomed love affairs, too. Even as I was writing I asked myself, who the heck would want to read all this? But once I got started, it became a joy …

My family isn’t perfect, and neither am I, but I laid it all bare. Writing it all down was liberating really; it taught me not to care.

I’ve had no children, that never quite worked out, so I had nobody to pass all these stories down to. But I still wanted to leave something behind, a footprint, to show it happened … Now I can get on with the next one … I’ll be 95 in May, I’d better hurry up.”

– Margaret Ford, 94, Britain’s Oldest Debut Author, A Daughter’s Choice as reported in The Guardian & The Observer.

When I say something like ‘inspiration is overrated’, it’s not because I think you don’t ever need to be inspired. What I’m trying to tell you, and what I still tell myself frequently, is that inspiration is rarely the first step. When it does come out of the blue, it’s glorious. But it’s much more in your own hands than the divine-intervention-type beliefs we all tend to have about inspiration. Most of the time, inspiration has to be invited.”

– Jeff Tweedy, How to Write One Song (View on Amazon).

There was always the feeling that one would get around to being young again. And that when one was young again, life would resume the course from which it had so shockingly deviated.”

– Deborah Eisenberg, short story writer, Your Duck Is My Duck (View on Amazon)

If fiction can come alive in this way then it will always be on the side of life, it will always have vitality, even when dealing, as it often does, with the more painful aspects of human experience. At best it will be a celebration of life and at least, when times get hard, it will be a glow in the dark.”

– Graham Swift, on his recent novel Here We Are (View on Amazon) 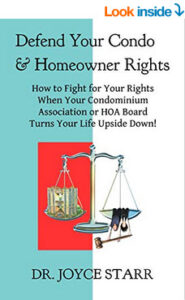 How Charging Owners to Rent Their Units Can Reduce Burdens & Costs. Do … END_OF_DOCUMENT_TOKEN_TO_BE_REPLACED

Condo Board Recall: 10 Steps to a Successful Board Recall Authored … END_OF_DOCUMENT_TOKEN_TO_BE_REPLACED

Discover how condominium association & HOA board elections SHOULD be … END_OF_DOCUMENT_TOKEN_TO_BE_REPLACED

Salt Secrets by Dr. Joyce Starr: Salt Tips for Life Dr. Starr spins a fact-based tale that all ages will enjoy! Keep it at your fingertips. - Yvonne … END_OF_DOCUMENT_TOKEN_TO_BE_REPLACED